What is the web?

The Internet is a bunch of computers that are connected together across the world. "Computer" here is used loosely---I'm not just talking about your desktop Dell, I'm talking about your laptops and your phones and maybe even the dimmer switch that controls the lights in your living room.

Different computers connect to the Internet in different ways, and using diverse media: for example, your laptop might use wifi to communicate wirelessly with a router, which itself is connected via a cable in the cafe; where you're working to another router, which is in turn connected to an underground fiber optic cable that leads to still another router, etc.

The key interesting part of the Internet is that every computer on it has a unique address, and any computer on the Internet can talk to any other computer, as long as it knows that address. Computers on the Internet talk to each other using a "protocol" called TCP/IP, which allows them to reliably exchange "packets" of information. ("Information" here meaning "a bunch of bytes.")

TCP/IP itself isn't all that useful for actually building applications on the Internet. It lets two computers communicate with one another, but it doesn't specify what that communication means. In order to have two computers more usefully communicate about things, our venerable Internet forebears invented other protocols that work on top of TCP/IP. Many of these protocols (like Gopher) have fallen by the wayside; others, like IMAP and FTP are still commonly in use. But by far the most prevalent protocol on the Internet today is HTTP: HyperText Transfer Protocol.

HTTP is a protocol designed to allow one computer to request a resource from another server. (Or to create a new resource on a server, or to modify an existing resource---but for now let's focus on just requesting resources.) The first computer sends a message to the second computer using a message that looks like this:

The second computer reads the message above, and because of the rules it knows from the HTTP protocol, understands it to mean "I want you to fetch a resource called /cheese.html and return it to me." The second computer then sends a message back to the first that looks something like this:

This response says to the first computer, "I found your document just fine. I think this is an HTML document (the Content-Type line) and it's 51 bytes long (the Content-Length line). Here's the document!"

The second computer in the example above is a web server---a computer somewhere on the Internet that is capable of responding to HTTP requests. Every time you type a URL (see below!) into your browser, somewhere behind the scenes a web server is being contacted, and a message much like the "GET" request above is being made to the web server on your behalf, and the server is responding with a message much like the "200 OK" message above.

We'll get back to HTML in a second, but first let's talk about what a "URL" is. The abbreviation "URL" stands for "Uniform Resource Locator," and that's just what a URL is---a string of characters that describes, in a uniform manner, where to find a particular resource (document, image, video, text file...) on the Internet. The URL is what you type into your browser's location bar when you know what page you want to get to on the Internet; when you see something like http://www.drzizmormd.net/ in an advertisement on the subway, you're looking at a URL. When you cut-and-paste the "link" to an amusing cat video from the location bar of your browser to send it to a friend, you're cut-and-pasting a URL.

URLs have internal structure, and it's worth talking about parts of that structure. Here's an example URL:

This URL has the following parts, each of which are used by your web browser to make a successful request to the web server that has the document you want:

At this point we have a basic understanding of a number of fundamental concepts---the Internet, TCP/IP, HTTP, URLs. Now it's time to talk about the real workhorse of the web, a formatting language called HTML.

HTML stands for "HyperText Markup Language," and that's a pretty good description of what it is. HTML allows you to take plain text documents and "mark them up" with a language that gives extra meaning to the text, above and beyond the meaning of the letters and words themselves.

Nearly every document that you look at on the Internet is written in HTML. Most browsers allow you to examine the HTML source code of any web page you visit. In Chrome, you can do so by right-clicking (or ctrl+click) on the web browser window and select "View Source." 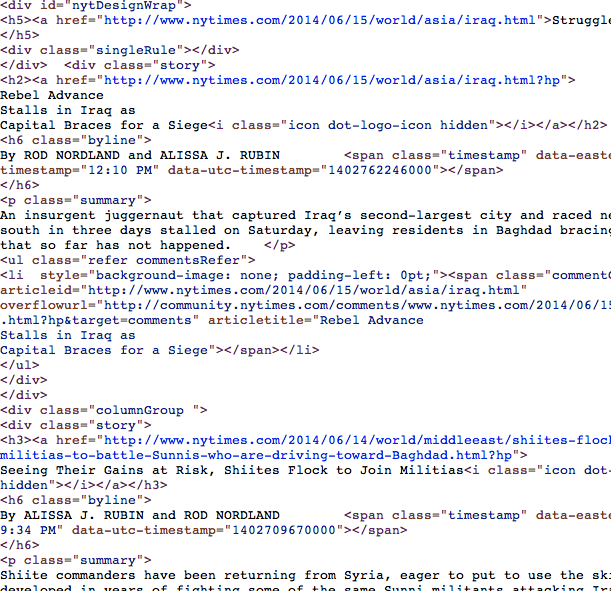 Your web browser knows how to interpret this jumble of weird-looking characters and render the beautiful New York Times home page layout that you know and love.

The task before us: learn how to write HTML so that web browsers can interpret our hopes, dreams and desires for what a web page should look like.

HTML consists of a series of tags. Tags have a name, a series of key/value pairs called attributes, and some textual content. Attributes are optional. Here's a simple example, using the HTML <p> tag (p means "paragraph"):

This example has just one tag in it: a <p> tag. The source code for a tag has two parts, its opening tag (<p>) and its closing tag (</p>). In between the opening and closing tag, you see the tag's contents (in this case, the text Mother said there'd be days like these.).

In this example, the tag's name is div. The tag has two attributes: class, with value header, and style, with value background: blue;. The contents of this tag is Mammoth Falls.

Tags can contain other tags, in a hierarchical relationship. For example, here's some HTML to make a bulletted list:

There are dozens of HTML tags. One of the biggest parts of reading and writing HTML is learning all of the various "tags" and what they mean.

Let's look an example HTML page. I designed this page to demonstrate how HTML works. It's not a very sophisticated page, but it's a good start! It's called Kittens and the TV Shows They Love. Click on the page and have a look.

Now let's go over the source code, reproduced below:

This is pretty well organized HTML, but if you don't know how to read HTML, it will still look like a big jumble. Here's how I would characterize the structure of this HTML, reading in my own idea of what the meaning of the elements are.

But we can also change the way that HTML elements look, either on a tag-by-tag basis, or by making rules that apply to whole categories of tags. The language that we do this with is called CSS ("Cascading Style Sheets").